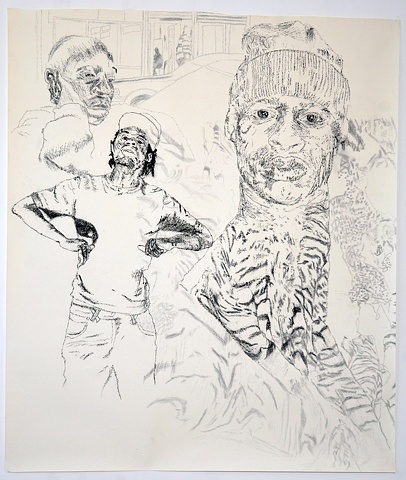 In this latest body of work, I have been using a "PAID" receipt stamp as a mark-making tool to create photorealistic drawings with. The term "PAID" is commonly used to mark that something has been paid for, but in modern day American slang also refers to one's level of success as determined by monetary worth. Getting and staying paid have become synonymous with success in hip-hop culture. This double reference to the control of the Black body is fully embodied through the ultimate means of the mark itself: capitalism. The white of the paper serves as both light & space in the picture plane, but conceptually refers to the Whiter foundations of Western civilization.

Both physical & mental control of non-European people & cultures, in particular African, has long been a central focus of the Western & European Imperialist powers. Whereas slavery can control a mass of people through force; institutions, societal hierarchies, and 'quality control' over creative acts can be equally as damaging. In an effort to overcome said limitations, I feel that it is necessary to understand the tools that continue drive society in that direction. That understanding then becomes power.

These works are part of a larger investigation in creating objects that both critique & catalyze through a mirroring of technical & conceptual application. It is my hope that by identifying & repurposing elements used to form negative perceptions of Black people that control of the Black body ultimately be restored.